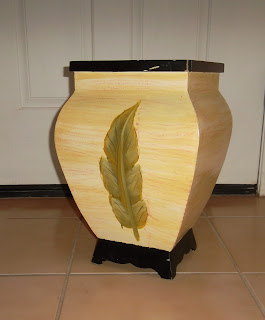 I've had this sort of awful wooden vase-thing for years.  At one point it occupied a place among other botanical items and blended in pretty well.  Three houses later, it doesn't really "go" with anything in the living room (or any other rooms for that matter).  It is sturdy and was only three bucks on clearance at Marshall's and what's more I've moved it three times in as many years.  I'm not getting rid of it.  Therefore it must be decoupaged.

I found some handmade paper at Cost Plus that very closely matches the new scheme in my living room (namely, using color instead of black, tan, and white).  Picked up a jar of Mod Podge and... 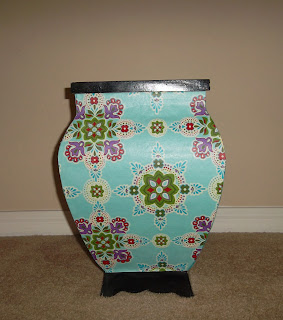 Magical, isn't it? I had to trace each side of the vase separately as they don't really square up and there was a good bit of smoothing with a credit card but I'm happy with the result.

The only problem is that decoupage is so very easy and cheap.  I now see any blank surface as deficient in some way.  That lamp! Wouldn't it be so much more adorable with a paisley base? That dresser!  I'm thinking polka-dots.  That picture frame!  Super Q's forearm!  The dashboard of the car!  Most of Nebraska! The possibilities are endless.

One great thing about living in Arizona is the near constant possibility of a bike ride.  Sometimes it may be a very short ride requiring a gallon of water and several forms of sun protection but you can truly get out there and pedal almost any old time.  Today the kids and I had oh, about 8 hours to ourselves while dh worked (on a Saturday...ugh) and went to a church meeting.  The boys quickly exhausted their screen time at which point we were faced with 6 hours to fill.  Washed the car. Made pizzas. Regaled Mom with hilarious songs about Boots the Monkey getting attacked by aliens (sigh). My mood was deteriorating; half-heartedly I floated the idea of a bike ride.  The boys agreed and we were off to the bike path.  We rode farther than we ever had before and at the end we found a sweet little park with GRASS (a rarity here) and a sort of retaining pond with WATER in it (again, a rarity) surrounded by rocks just begging to be thrown in that water.

A few weeks ago Super Q and I took our bikes to the drugstore (night-time candy run).  He was very earnest and serious about bicycle safety.  Riding ahead of me, helmet slightly crooked, he indicated right turns, stops, and some crazy made-up signal for "straight ahead."  As we left the busy street and entered our neighborhood, he yelled back to me, "In the neighborhood you don't have to walk your bike across the streets! Also there's no traffic lights!"  You can learn a lot about bicycle safety from a 9 year old.

the tiny cutlet: attacking my family's meat consumption with a bonesaw